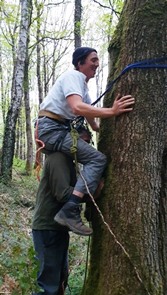 When I was first invited to write this column, it was hard to choose which of the events in the week to talk about as we were all so busy. Two months on and with no racing happening, I search for things to write about as our lives are so very different.
Bryony and Hadden are not earning as they do not fall into any category for Government help. Both joked they want pocket money for doing the jobs around the stables. I told them in that case, as I am not earning either I too want pocket money. Nikki at this stage told us not to look at her and walked out of the kitchen.

Bryony is hoping to take on a dog. Her dog, Maroi, sadly passed away last year and she was heartbroken. It has taken her a number of months to feel she is ready to have another. She put feelers out for a rescue dog as she loves the idea of giving an unwanted dog a home and we have since been contacted by someone locally whose dog has had an unexpected litter and wants homes for them. The pups are currently only two weeks old so we can only see photos of them at the moment. She is, we all are, terribly excited.

As you will be able to read in this week’s issue of the Independent, Bryony has chosen to auction off a beloved pair of breeches which she wore when she won her first Grade 1 race on Black Corton back in 2017. She wants to raise money for a not for profit organisation who rehome dogs that have been used for breeding and are no longer wanted. The poor dogs are often traumatised, never lived in a home before or felt any type of affection. The dogs are rescued from the breeders who otherwise euthanise them. The organisation – Many Tears, who has foster carers all over the
UK with many in the south west, are desperate for funds due to the impact of the coronavirus and Bryony wanted to help. If you fancy owning a piece of racing history then make sure you place a bid by emailing support@manytearsrescue.org.

There’s been more talk about when racing will start again but until we hear for sure we are not getting our hopes up. Racing is rather different to football as contact is limited but we do understand that in the event of a bad fall, emergency vehicles would need to be diverted from other duties. We fully support the hard work that the NHS are doing to support the country and despite no one being able to hear us, we are outside the house at 8pm every Thursday, banging our kitchen utensils and
ringing the house bell in praise and thanks.

It seems a week does not go by without us saving a bird or an animal. This week it has been baby owls or owlets. Whilst on a walk in the woods, Bryony found a dead owlet that looked like it had been savaged. She spent a while investigating where it may have come from and found the nest with three other owlets in it less than a metre up, precariously positioned on an overhanging branch right next to the footpath. The owlets could easily be reached by a dog or fox and its probable this is what had happened. We faced a similar situation some years back and we were able to successfully move a nest into a safer position by creating a secondary nest further up the tree and physically moving the chicks by hand from one nest to the other. This time the tree was a rather awkward shape and the next branch up was about 40 feet from the ground. It was at that point Hadden called his friend Finn who is a professional climber and he managed to climb the tree and move the owlets to their new and improved residence that Bryony had created out of a wicker basket tied to a higher and much safer place. As we all worked on ‘Project Owl Rescue’, the mother owl sat keeping a close watch as we moved her babies to their new home. In no time at all, as we stood back and watched, she went straight to the new nest and snugged up to her babies as if nothing had happened. It was extremely moving and a thoroughly rewarding situation. We would all like to thank Finn who was able to span the tree in what felt like seconds and save the day. 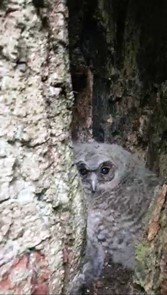 Project Owl Rescue – Up in the tree

As I sit here writing this, Dan and Hadden are taking advantage of the rain and are re-seeding and fertilising the fields and gallops. Without grass we have to feed the horses hay, which is not cheap, so an ongoing supply is important. The ground was initially ruined by the wet winter and it became a sea of mud. However before long it became unseasonably dry which meant the grass seed if spread would not germinate. Whilst we all love the sun when it comes to animals and crops you need
a fair share of rain too. On that note it’s starting to drizzle again so I am going inside for a cuppa.

Until we catch up next week, keep safe and importantly be kind to each other.
Jimmy