We were all shaken up on Tuesday evening when the shoulder of Gaelic Flow the horse Bryony was riding at Newton Abbot appeared to dislocate, leading the horse to fall and taking Bryony with him. The jockey behind Bryony automatically jumped the fallen horse only to land on Bryony that was laying on the ground in front of it. It couldn’t be avoided.

The gelding – Gaelic Flow, which we have known for some time and was a dear little horse had to be put to sleep immediately. A tragedy in itself. Although Bryony’s face and head were untouched, she was caught in the chest, legs, knee and arms.
Nikki and I watched the event at home and for about a minute I can only describe it as having your life put on hold and any control you think you have of it, being taken from you. It was not until we saw her sit up did we take normal breaths again.

Anyone who thinks that a jockey isn’t affected emotionally knowing that the horse you were riding only a few moments ago has to be euthanised is wrong. Bryony had ridden Gaelic Flow a number of times and had a relationship with him. She cradled his head in her arms as he slowly passed away. Added to the physical injuries and shock from the fall, the whole experience was immensely stressful. As a family we send the owners of Gaelic Flow and all who were connected with him our deepest sympathies. 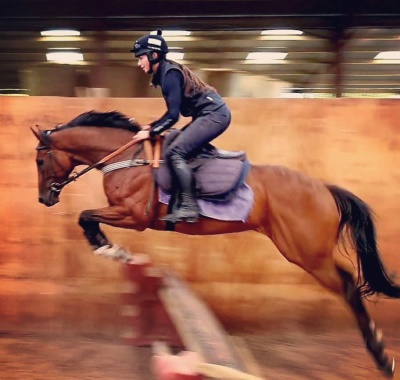 We spoke to Bryony soon after the fall and she was very shaken up and in a great deal of pain. As parents of two jockeys we have gone through this many times and it never gets any easier. Despite everything and with Bryony’s body still hurting all over, she went on to ride a winner the next day at Uttoxeter. She never ceases to amaze us.

During the week like hundreds of other motorists I got caught in the traffic following the closure of the A38. I later found out that a wheel had come off a vehicle and hit a man out walking his dog which fatally injured both him and his dog. I am not sure if Bryony’s fall added to the emotion I felt when I heard about the incident but it hit home hard. Whether we choose to take chances with our lives, such as a jockey does every day, or whether like this poor man whose life was taken in a freak accident that no one could have foreseen, we need to appreciate everything we hold dear to us. Life is just too precious to waste our time and emotions on things that are just not worthy of them.

Prior to Bryony’s fall she had been schooling Presgrave the horse we recently bought. I know I have already said it but my goodness he is stunning, and he jumps beautifully. He is definitely going to be a little star.

Hadden is into his final week of quarantine in the Dominican Republic before heading on to the States. He says he was shocked by how untidy the streets can be there. Initially he thought that it was due to the aftermath of hurricane Laura that had lifted furniture, crates and litter and strewn it everywhere, but soon realised that the locals appear to create the daily disorganisation, tidying it up during the night only to start again the next day.

The weather is starting to turn now. The sky is getting darker and it looks like we are in for rain. I’ve left my wellies outside, so I better get them in before the inevitable.

Until we catch up again next week, appreciate the ones that love you and importantly be kind to each other.