So much for my last column when I talked about Goodwood opening its gates to a crowd of 5000 on the final day. That same evening as I wrote the article the Government announced the pilot event would not be going ahead due to the rise in cases of corona-virus in the country.

Yesterday I heard that circuses will be opening their tents to mask-less crowds as spectators would be all facing forwards. Covered tents versus open air events. I am obviously missing something.

Back in the land of sanity, the British Horseracing Authority has announced a number of changes to its Equine Anti-Doping Rules which will take effect from September which should reduce the level of sanctions and fines.

It followed a number of Disciplinary Panel cases which called into question the assumptions that had been made regarding the Rules and how they should be applied. It was also felt that a review of these Rules would lead to them being made simpler to understand and follow. 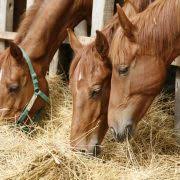 Whilst we have never had a problem, many yards have, and problems can occur through the simplest of errors.
The BHA can turn up at a yard at 5am one morning unannounced and test the horses. It only takes a stable hand to have a wee in the stable on straw and for the horse to eat the straw that may have had traces of caffeine on it, for the horse to be banned temporarily from racing and the yard fined. It is imperative therefore that things like chocolate bars that have caffeine in them, and tea/coffee are kept well away from the horses. Regular hand washing is nothing new to us. Traces of even the most innocent substance like an anti-inflammatory or paracetamol found in a horse, due to it licking something it shouldn’t, can cause serious consequences for a yard.

The new rules mean that if a horse tests positive for a prohibited substance, in order to avoid a penalty, the responsible person must establish the precise source of the positive finding and prove that they had taken all reasonable precautions. Also, rather than having a ‘one size fits all’ fine and ban rule, cautions are available for lower level breaches and suspended sanctions are available for breaches.

The main change is that there is a far wider sliding scale for breaches which mitigate the impact particularly on smaller yards, who otherwise have a good record of compliance with the rules and can demonstrate that reasonable precautions have been taken.

Although much rarer nowadays, horse feed can be the cause of a positive reading. Most yards will now take samples of feed from every bag they purchase and keep this on file. This means that if a horse tests positive for a substance, its feed can be traced and tested and if found positive the fault then lies with the feed provider and not the consumer.
This morning I watched as a crane lowered our new holiday cabin onto our land. We bought it both to rent out and for friends to stay and enjoy. The property looks straight out on to Dartmoor and is surrounded by the most stunning grounds. We are installing a telescope for people to take advantage of the dark skies that we benefit from around this area but particularly where the cabin sits.

Finally, on Monday we said goodbye to Ollie the owl. He or she had become an expert in swooping down to catch its prey and we were confident it could now stand on its own two feet/claws. Bryony returned home to set it free. She had found it as a young owlet abandoned before lockdown and nurtured it back to health. We removed a panel from the roof of the barn when he or she had lived for some weeks now, and following a good meal we watched Ollie fly away into the trees.