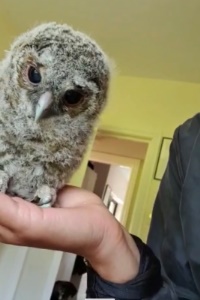 It’s the big question of the week. Are we going to be allowed out or not? We are all waiting to hear what Boris says. And if we are allowed out then what are the restrictions? I don’t envy the Government. The news says we are facing a recession worse than we have known in generations and unemployment soaring. At the same time people are still getting ill with the virus – or worse. Who do they please? How do they find a middle ground?

As a family consisting of a vulnerable elderly mother, Nikki and myself worried about both the family’s health as well as the business, plus two young professional children who need to earn a living, we are torn. We are hopeful that the rumours for National Hunt racing to start again in July means that by then the number of people contracting the virus will have fallen significantly and possibly, just possibly a vaccine may be available. We need to work but we want to stay safe as well.

Last week I told you about the owls’ nest we created in order to rehome an owl and her owlets who had precariously built her nest less than a metre off the ground and had already lost one chick to what looked like a fox or dog. The rehoming was a success and we saw the mother feeding them in their new abode. We were delighted. However, on Wednesday, Bryony went to check up on them and found one on the ground not moving. She had hoped the mother would fly down and somehow rescue it, but after waiting for nearly two hours it appeared the mother was not going to do anything. Bryony brought the young owl home.
Fortunately, we have a friend who is a falconer who used to be commissioned to fly his falcon around Cathedral Yard in Exeter to clear the pigeons. We rang him to ask what we should do. The owlet – now called Oscar, although we have no idea if it’s male or female, has been happily feeding and attempting to fly around the house making itself quite at home. We have no intention of keeping it here and are following the recommendations of our falconer friend with the objective of returning him to the wild as soon as he can cope by himself. According to him, he or she may stay semi wild, returning to our garden now and then.

On a sad note, Rosie the Robin lost all her chicks. I found one dead on the floor of the riding school one morning but had hopes for the other fledglings who had started to learn to fly. The next day however, we found the remaining two dead as well. As we have watched her daily since she started to build the nest some weeks ago, we have all been saddened that all of her hard work has been to no avail.

Bryony’s knee is recovering quickly now. She has been having regular physiotherapy and has been religiously doing the exercises given to her. She thinks it won’t be long before she’s on top form again. She has finally succumbed to social media and will be launching an Instagram account very soon. Whilst you will find various Twitter, Facebook and Instagram accounts in her name, all are fans or people pretending to be her.

If you saw last week’s Indy, you will have read that Bryony is auctioning off her breeches to raise money for an animal rescue organisation who have been hit very badly financially by the current climate. There is a video clip playing on the Indy website where she talks about why she wants to help. If you want to bid for Bryony’s breeches (signed) that she wore on her first Grade 1 race on Black Corton, send your bid by email along with your name and telephone number by 12 noon, May 15th to support@manytearsrescue.org. It’s for a good cause and you may end up owning a piece of racing history.

I am being called in from the house. Bryony wants me to see something the owl is doing. If it’s making a cup of tea for me I will be delighted.

Until we catch up next week, keep safe and importantly be kind to each other.
Jimmy