My Point to Point Days. Plus the impact of a robin’s nest on the family.

What a week. Who would have ever dreamed that our Prime Minister would be in intensive care with COVID-19? I sit here and look at my healthy family going about their daily chores and realise just how lucky we all are.

Having the children home means some of the workload has been taken off me. I have to say I am thoroughly enjoying it and especially in this hot weather. Bryony is organising the yard and both she and Hadden are schooling and breaking in horses. I am using this ‘downtime’ to enjoy our land and am regularly reporting back to the family on the transition of frogspawn to tadpole, the intense activity by newts in our pond and the latest addition to the family – Rosie the robin and her four chicks to be.

It is Rosie that has impacted on our lives this week. I had been noticing that a nest was quickly evolving in the precarious position next to the doorway of our indoor riding school. It turned out to be a lovely little robin who seems oblivious to the family’s interest as she sits on what we now know are four eggs. Her choice of position for her home building has meant we cannot use the doorway to the school and have had to create another door by way of a loose panel so not to disturb her. 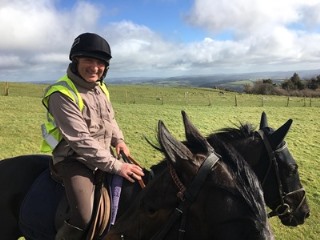 Me on the family’s two-headed horse (belated April Fools) 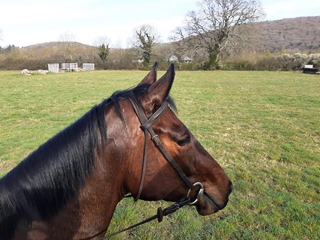 Below, broken in this week. This four year old watches as his friends race on the gallops.

I’ve had a number of emails and calls about my column last week when I reminisced about how I entered the world of racing and how Nikki and I would run donkey rides on the beach to put food on the table. This week I thought I would talk about the next chapter in my life as a rider in point to point but about one specific day in April 1979 that impacted on my life and to say thank you to those involved.

It was always my ambition as a teenager to ride 100 point to point winners. In fact, I did move away from point to point but not before I won 86 of the original target over just four years.

It was April 14th and there were five races at Kilworthy. The going was good to soft. I ran in three of the five (I didn’t qualify for the Ladies) and came 3rd, 1st and 2nd. In my first race – the Men’s Open I was riding a horse called Uncle Arthur. He was owned by a lovely man called Mr Ogle whose two daughters I still work and ride for today. I remember riding for him when I was no more than 15 or 16 years old. That same day I rode another horse for Mr Ogle in the Adjacent Hunts’ Maiden race and came 2nd. The horse was called Goodness Me. I remember her well as she was the tiniest of mares who could hardly see over the fences. I admired her for having so much courage. Mr Ogle was a very special person to me.

I then came 1st in the Adjacent Hunts’ race on a wonderful horse called Trentishoe. The owner was a lovely lady called Gail Harrison. I remember that if anyone were to ride any of her horses that were never to use a whip. She was out vet’s daughter and had been Martin Pipe’s the famous trainer’s secretary for some years. She went on to work for Martin’s son David Pipe who also became a successful point to point rider. It was Gail’s request never to use a whip that taught me to ride with hands and heels only which I try to do whenever possible today.

One of my very best friends is Martin Hill. We have known each other since were teenagers. He rode that day in the Adjacent Hunts’ Maiden on a horse called Used Notes. Martin became a very successful trainer in his own right, and I went on to ride for him at Crimp Morwenstow in North Devon and also won for him under rules at Haldon – Exeter. My son Hadden has ridden and won for him and now it is Bryony’s ambition to do the same. It would mean so much to us as a family.

Whoever would have thought that that one day on April 14th, 1979 would weave so many wonderful relationships for me that have lasted 40 years?

These lock down weeks may be frustrating but they do make you think deeper and appreciate what you have got. To all my friends out there, sorry I couldn’t mention you all but thank you for being you.

Catch up next week. Until then, keep safe and look after each other.