Equine dentistry has come a long way since I was a lad, but it still remains a potentially nasty situation when a tooth requires removing at the back of a horse’s jaw. 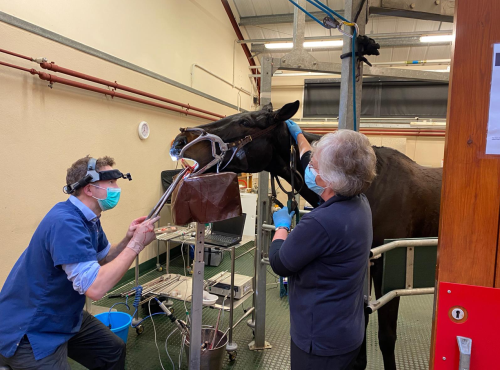 This week we noticed that one of our mares had a swollen face and a nasty discharge from her nose. We managed to look inside her mouth to see what was obviously an infected and broken tooth causing the problem and it was at the very back of her jaw.

A horse’s jaw is very long which enables it to grind down what it eats, and it is not easy to reach its rear teeth. In some cases, if a tooth cannot be extracted going in through the front of a horse’s mouth the equine dentist has to go in through the side of its cheek. Fortunately, on this occasion she was lucky, and the tooth was distracted via the front of her mouth but not before 40 minutes of dentistry. If you look at the photo you can see the size of the tooth which is being held by the dentist’s tweezer-type apparatus.

This procedure had to be carried out at Langford Vets Equine Hospital in Bristol. I used to attend the hospital as a young man just to learn about equine care. Whilst I was there this week, they told me the unit was closing which was very sad news as it means many horse owners will have to travel further afield for care. With regard to our mare, she is now home, happy and eating well.

We have also been busy racing this week with a good day at Lingfied where we were pleased with Findusatgorcombe who had his first run of the season, and then Bryony went on to win twice for trainer Paul Nichols who attended the races and was clearly delighted. We also had a good day racing at Exeter with F S Lola ridden by Brendan Powell. As I write this, we are looking forward to Bryony riding Yala Enki at Cheltenham at the weekend.

Back at home we are enjoying the warmth and what looks like is going to be an Indian summer which will help dry up the jumps. The horses are training well, and we have about half a dozen running over the next fortnight. Their winter coats have grown so these will need to be trimmed. Whilst this sounds harsh – trimming winter coats when it’s cold is a necessity because if they don’t they sweat badly when racing. Following a race, they are washed down, and a winter’s coat would take a long time to dry leading to the horse getting cold. Whereas a short coat means the horse is dry and warm again in a matter of seconds just by rubbing it with a blanket.

Next week we are looking after Bryony’s dog Merlin. Merlin the lurcher goes everywhere with her including to the tracks where he has a snug bed in her 4×4 and is looked after by Bob the driver during her races, who loves him dearly. Next week however he is having ‘the snip’ so Bryony made it quite clear he needed to receive first class attention with us until he was back to his old self. You will see plenty of photos of Merlin on Bryony’s Instagram account along with many other photos at #officialbryonyfrost.

As I look out of the window here the autumn sun is shining. Most of the leaves have fallen. I noticed the other day that the starlings have all migrated south for winter and there is no sign of the hedgehogs who we would often see on the lawns. It’s definitely open fire and hot toddy season.

Until we catch up again next week, take care, keep warm and remember to be kind to each.