A week in the life of Jimmy Frost – Bryony’s birthday and racing continues to be suspended, 19.04.2020

I am sure I am not the only one who is finding that all the days are rolling into one and I have no idea which day it is when I wake up. Monday however was Bryony’s birthday and it was her first one in a number of years when she spent it at home with the family.

She always works on her birthday and this week was no different. She was out in our yard before breakfast and cards and presents sat on the kitchen table waiting to be opened. 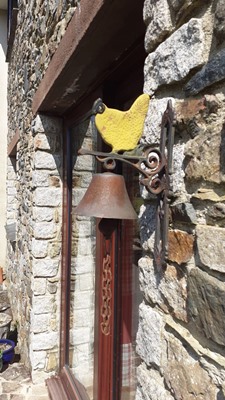 We have a big bell just outside the back door. Depending on the wind, it can be heard from most of the boundaries of our land. When the children were little, we installed it so we could call them in for lunch or dinner. We still use it today to summons everyone to the house. On Monday we rang it to call everyone in for Bryony’s birthday celebrations.

Presents were a challenge this year. Her mum and I knew she liked a specific pair of riding boots and we were assured by the manufacturer that whilst the ones she wanted were no longer in production the ones we were buying were virtually identical. They were not and they didn’t fit. We both felt deflated. Her older brother saved the day by having a silver trinket box engraved with our family motto – ‘Always paddle your own canoe’. It’s something that my grandmother used to say. In other words, don’t be reliant on others for your own success and happiness. Bryony loved it.

We had hoped that the restrictions on racing would have been lifted this month but because of the continued rise in Covid 19 cases we understand this will not be happening. According to the BHA – British Horseracing Authority, ‘Because of the very strong likelihood that restrictions on mass gatherings will continue, the BHA has decided that racing with crowds will not be possible until June at the earliest. When there is greater clarity about the duration for which restrictions on crowds will apply, the BHA will communicate this to the sport, to customers and to fans. The BHA’s Chief Executive, Nick Rust, said: “We stopped racing in March to protect the health and safety of the public and to limit demands on the NHS. It is right to continue this suspension until the pressure on the NHS allows for a resumption and we can assure the safety of those taking part”.

Back here at the stables, the little robin (Rosie) that nested in the frame of our indoor riding school is still sitting on her eggs. Evidently from laying to hatching takes approximately 14 days so the chicks will be due next week. We have chosen not to use the school at all until we know mum and chicks are fine.

Last Sunday from inside the house, we could hear our two Labradors frantically barking. At first, we took no notice but then all of a sudden Bryony and Hadden were shouting for me to help. In turned out that the dogs were trying to play with a hedgehog that had sensibly rolled into a tight ball. I managed to get the dogs off and rescue this poor little creature that was covered in grass where the dogs had been pulling it around the lawn. We kept in a box with hay overnight and the next morning it appeared to be moving without distress so we put the box with the hedgehog in it, behind the riding school where the dogs couldn’t get to it and by the end of the day it had gone. Hopefully it is now regular chomping on worms and beetles somewhere. I also erected a bird box that Hadden got me for Christmas this week. Within a day I saw a blue tit making a nest in it. Property goes quickly around here!

Easter weekend dozens of people, including a crowd of youths were picnicking on our land and we were torn about what to do. My heart said they might have lived in high rises with no access to gardens and it would be selfish of me, someone who is surrounded by all this beauty and space, to ask them to move. My head however said it was wrong. One of the reasons why we have been told not to travel is to reduce any chance of accidents occurring which would mean the emergency services who are already under pressure, being called out and distracted by something that was totally unavoidable. I chose however, rightly or wrongly, to do nothing.

On that note it’s time for me to ring the bell for dinner. Catch up next week and in the meantime be kind to each other.