When you are in the public eye winning races, people and companies want to be associated with you. Nowadays thousands of mostly young people, work hard to increase their social media channels, with the objective of creating their own broadcasting platforms online that can earn them an income from brand association. These people are called ‘influencers’ as they can help influence the buying habits of their peer groups. Successful influencers can earn considerable sums of money doing this and often receive ‘freebies’ in return from grateful manufacturers.

The prize for winning The Grand National that year was a healthy cheque plus according to all the prize literature – Citroen GTi 1.9. The car sat precariously on a raised structure that was visible throughout the grounds of Aintree. Its value I don’t remember but the cost for the motor manufacturer to have such a dominating presence at the course over the three-day event must have been enormous. In return the value of the promotion of the car and the brand was obviously considerable, with the world’s press recording images that would be seen all over the planet.

It is every jockey’s dream to win such a prestigious race and despite my confidence it was only as I passed the winning post did I hear the crowds cheering and started to take my achievement in.

As film crews, photographers and journalists surrounded the fences I only briefly thought about the winner’s prize. The event organisers guided me to where I was required to stand for the media to interview me and for a period of quite some time, I was in the hands of the organisers who ushered me from place to place so I would be seen associating with the sponsors who had contributed financially to the event.

Hoping finally to be able to shower and change and celebrate my success with my family, I was told that I had to go to the Citroen stand and accept my prize of the car. I had just found out that the prize was in fact on loan, as my friend had won the car the year before and said it drank petrol therefore was totally uneconomical and after a year they would either take the car back or charge me the market price to keep it. As far as I was concerned a prize meant a gift, something to keep. I told them I didn’t want it.

The photographers from Citroen were waiting for a shot of me accepting the keys. Hundreds of people were watching. They asked me why I didn’t want it and I told them it wasn’t really a prize as I couldn’t keep it, plus I had just been sponsored by Renault and was driving a small Renault that could go for miles on a £20 tank of fuel. At this stage things were getting very embarrassing for them.

It was at that point someone senior from Citroen came over to me to find out what it would take for me to accept the car. I told them why but asked how much would I have to pay at the end of the 12 months if I did take it. He replied £5000. In those days £5000 was a huge amount of money – it still is. I said no thank you and walked away. He then chased me and said okay £1500 and offered his hand to shake. I shook his hand. 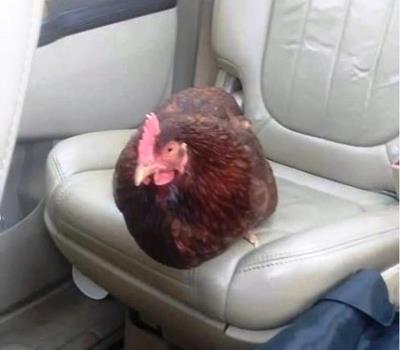 And make sure to remove all the chickens!

Twelve months later they rang me to ask what I wanted to do with the car. I told them I would buy it for £1500. They said I could buy it for £8000. I told them about the deal on the handshake, but they would not budge. They told me if I didn’t pay £8000, they would be coming to take it away on a certain day, a day that I was not at home. I replied fine, but I warned them that the car was kept in the bull pen and if they came they must be very careful not to let any of the aggressive bulls out, and would they make sure they removed all the chickens that were roosting inside of it.