Once again, our friends the Balding family have done themselves proud with Andrew Balding training Her Majesty the Queen’s horse Tactical which won the Windsor Castle Stakes at Ascot.

Tactical, one of several horses she owns, won to complete a double for jockey James Doyle. It was the Queen’s first Royal Ascot win since 2016.

Like everyone bar the essential attendees, Her Majesty will have been watching from home behind closed doors because of the coronavirus pandemic. Bryony rode one race behind closed doors before lockdown, and she says it is a very strange experience but one it looks like we are going to have to get used to for some time to come.

Staying on the subject of Royalty, I was lucky enough to ride several times for the Queen Mother back in my day. The horses were again trained by the Balding family – then Andrew’s father Ian, and I remember having a good chat with the Queen Mother after winning on her horse – Lunabell in 1992 at Fontwell. She even signed a photo of herself for me. I met her Majesty Queen Elizabeth II at an owners’ lunch some years later as did Bryony last year.

The change in the weather created a great deal of concern for the jockeys, trainers and owners attending Ascot, with the ground going from what was virtually solid to totally sodden. The combination of rain in your face and mud from the kick back from horses’ hooves can reduce the confidence of even the most accomplished jockey. A little bit of trivia here, since Ascot racecourse was founded in 1711, two people have died at the races through being struck by lightning. 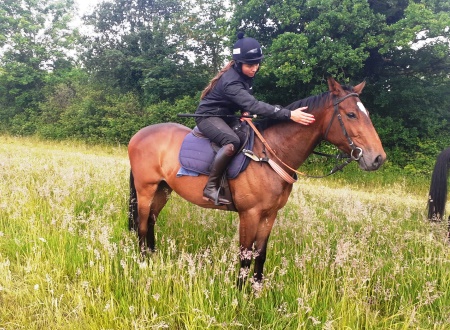 This week Bryony and I want to say a big thank you to prosoccer.com who kindly presented Bryony with trainers and clothing after she had mentioned that she had worn her trainers out through her extensive running and work outs. The combination of not be able to ride recently due to her knee injury, plus having the time on her hands to do it, has meant she has put herself though a rigorous training programme preparing herself for jump racing when it starts back on July 1st.

Our eldest son Hadden was extremely disappointed this week after failing to find a way to get back to the States to ride in the US Gold Cup. Due to coronavirus, the US has strict laws about who enters the country and from where. The horse he would have ridden was the favourite and the race worth $100,000. He had been given some false hope being told that he would be able to enter the country if he flew back via Gibraltar, but it was not the case. Hadden’s full-time job as a jockey in the States has been on hold since the country locked down in March.

A new addition to the family has arrived. We collected 8-week-old Merlin, a lurcher, during the week and already he has the whole family waiting on him hand and foot. His grandparents – Nikki and I, are doing the 2am and 4am trips into the garden with him and the rest of the family are looking after him during the day. Bryony says she is already in love with him, actually we all are. I cannot believe something so small and so young can be as confident as he is.

Tomorrow Bryony is off to meet her new media management team who she has signed to. They already manage Frankie Dettori who amazingly won the Gold Cup at Ascot for the third time in a row. The company has successfully placed many of its clients on programmes such as I’m a Celebrity… and Strictly. Bryony in sequins. Never!