Surely, I can’t be the only one that finds inconsistencies unfair?

The Government has announced it hopes to be able to introduce spectators to sports events as of October 1st which means racecourse too should open. During the week a friend of mine took me to the speedway at Taunton. There was an estimated crowd there of over 1200 in a reasonably small area. On the other hand, racecourses currently are closed to only but a very few people directly involved with the horses. Isn’t speedway a sport? Surely racecourse goers are less of a risk at passing on the virus as they are spread over a far greater expanse of land?

On another point about inconsistencies. There are strict rules about using the stick on a horse when racing. Unless there is a good reason why it has to be used more, a jockey should only use it when necessary and should not exceed eight strikes of the stick in a race. The stick can also only be used on the flank (backside) of the horse or on the shoulder in the forehand position. I was watching a race on August 18th where a young jockey caught the horse with his stick in the wrong position once (ribs) and received a two-day race ban. Fair enough. The next day on the 19th, I watched a race at Stratford where an older jockey used his stick on a horse that was clearly winning by over 20 lengths. He went on to use it again after the race was over just to make the horse walk on despite it obviously being exceptionally tired.

This leaves a very sour taste in my mouth as this jockey went unpunished for what is in my mind a far more serious and unnecessary misuse of the stick. It is something the BHA needs to address as we see inconsistencies too much. 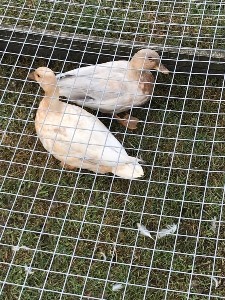 The call ducks given to Bryony by Neil King

If you have been watching racing you will have noticed that Bryony had a super day at Market Rasen where she took two 1sts for trainer Neil King and a 2nd for David Elmsworth. David trained Desert Orchid and is a great friend of mine who I have been fortunate to ride many winners for.

Neil was obviously delighted with Bryony and mentioned to her that he had a pair of call ducks that he was looking to rehome. As you will know if you have been reading my column that we all love wildlife and Bryony and Nikki have been wanting call ducks for years. Neil said Bryony could have them. So, this week I have been digging out a duck pond and converting an old hen house into a duck house so they can be kept safe at night.

After six months of having our family altogether at home, Hadden sadly leaves on Monday for the US to return to timber racing and show jumping. He could be gone for two or three years now depending on the opportunities out there. He is excited as he has many good contacts across the pond and it is where the action is with show jumping being much bigger in the States than it is here in the UK and earnings being far greater too. Nikki and I are trying to keep smiles on our faces, but it is going to be hard. 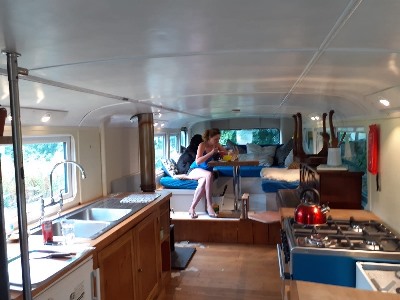 The top floor of Betty the Bus

You may have watched an episode of George Clarke’s Amazing Spaces a while ago (available on YouTube) where he interviews Hadden and his partner of the time – Ellie. The two converted a double decker bus into a state-of-the-art home which they called Betty. Betty is beautifully furnished, comes with a wood burning stove, modern kitchen with a gas oven, an en-suite and even a piano. She sits on our land overlooking the valley and Dartmoor. We have decided to rent Betty out to couples who want to enjoy a short break far from the madding crowd and in stunning surroundings. If you know anyone who might like a break in Betty the Bus contact me or Nikki at Frost Racing Club.