With the weather so amazing Nikki and I agreed that Wednesday would be set aside for haymaking. I had slept badly anyway, but had woken up horribly early due to the crow that on more days than not, bangs his beak against our bedroom window until one of us gets up and scares it off.

Hadden our son, was already up and was about to set off to school the horses for Sandra Grose at Ivybridge Equestrian. He thoroughly loves the work he is doing there and after grabbing some breakfast off he went whilst I got ready for a day in the fields.

As I started work in heat that was a challenge even so early in the morning, Nikki came out to say that Hadden had broken down on the dual carriageway and needed help urgently. Dropping everything, I set off. It turned out that there was not enough diesel in the tank, and he had run out of fuel. I took my life in my hands as cars roared by at full speed whilst I stood filling the tank up from the plastic gallon container I fortunately had in my car. The engine started and Hadden continued on his journey to work. I returned home and went back to haymaking.

Some weeks ago, and partly encouraged by the reduction in income during lockdown, we decided to create a new revenue stream by diversifying into holiday rentals. We bought a purpose-built cabin that will easily sleep four, and after we have given it a total refurbishment, it will sit on a quite piece of our land. Between haymaking I was sorting the building of the foundations where the cabin will eventually sit.

After Hadden had finished at Ivybridge, he met up with Nikki and they set off for Hadden’s first show jumping event since lockdown at Chard Equestrian Centre. He rode one of his own horses there – Alanta, and according to both of them she performed very impressively. In the meantime, I was due to meet two ladies at home who were looking to buy one of our horses. They were still there when Nikki and Hadden returned from the event. 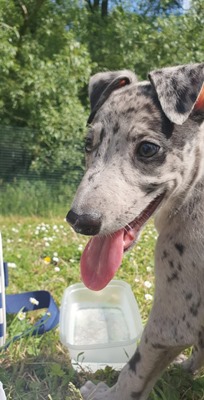 In the dog house – Merlin the pup

If you have been following my column you will know that Bryony has taken on a puppy. At nine weeks old, despite being tiny he has teeth like needles. One of his games is getting hold of our trouser legs when we walk, and we drag him along. Until Wednesday that all seemed quite innocent, but the game backfired badly. So there I was in the yard chatting to the ladies who had by then decided to buy the horse, when all of a sudden Nikki who was wearing shorts, cried out for me to come into the house. The puppy, Merlin, had mistaken Nikki’s bare legs for trousers and as Nikki tried to pull away his teeth had torn a 10cm gash in her ankle. I apologised to the ladies, left them with Hadden to sort the sale, and took Nikki to hospital.

On arrival at the Newton Abbot hospital, Nikki had her temperature checked. Surrounded by signs that read how important it is to stay away from hospital if you think you have Covid, Nikki was quickly ushered out of the way as her temperature was frighteningly high. We both then panicked that she might had the virus. Who had we seen? What if the children had it? We sat there for some time working out what the fallout would be if the whole family had to isolate. Later on and eight steristrips later, Nikki’s temperature was taken again and it had gone back to normal. We both nearly collapsed with relief. We left the hospital with a box of antibiotics, bought fish and chips on the way home and then washed the blood out of the carpets. Haymaking and cabin foundations laying on hold.

Until we catch up again next week, keep safe, wear long trousers if you have a puppy, and importantly be kind to each other.