On Monday 24th we said goodbye to Hadden who set off back to the States to return to his job and passions – timber racing and show jumping. It appeared to be straightforward, he bought a ticket from Heathrow to the Dominican Republic via Miami. His objective was to quarantine in DR for two weeks before returning to the States. The DR has a safe corridor with the States unlike the UK.

Arriving two hours earlier than check in opened, he was able to mooch around the airport and all seemed fine. When eventually check in opened he was told he couldn’t fly via Miami even as a transit passenger and he should never have been sold the ticket. The only flights to the Dominican Republic were via Madrid and although he could take this route, no flights were available from Madrid to DR until the next day. It meant that Hadden needed to stay overnight in Madrid.

On Tuesday morning he rang from Madrid to say he had slept well and was setting off to the airport for DR. 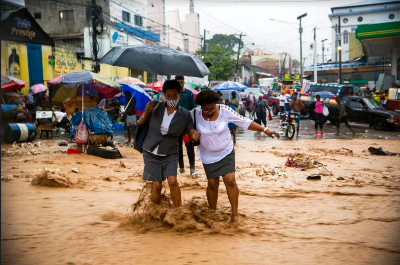 He finally arrived in the Dominican Republic early hours Wednesday. He told us that the people there seemed very friendly. Great we said. Then it was announced that Hurricane Laura might possibly hit DR sometime within the next 48 hours. The hurricane was thought to be one of the strongest to ever hit the US Gulf Coast with winds of up to 150 mph.
As worried parents, Nikki and I continued to keep an eye on the news on our phones. Thursday the 27th Hadden sent photos of some of the damage along the shores where Hurricane Laura had skirted. There was not a great deal to see as the locals had been up in the early hours clearing debris.

By noon GMT he assured us all was fine. His message to a friend that we were told to pass on was that he would not have taken on the challenge without a supreme support network and that his free rein childhood taught him not to fear failure. Nikki and I finally felt at ease.

Back here in Blighty, Bryony has been very busy schooling Paul Nicholls’ horses ready for when the courses open up to crowds again September 1st. She says they are all magnificent and she is loving every moment. We too are busy with our team of 15 amazing horses plus our new arrival, a three-year-old stunning gelding called Presgrave.

Presgrave arrived with us early in the week. He was previously trained by Joseph O’Brian from Ireland. We have seen him run five times on the flat and he is very exciting and shows incredible promise. He is one of the most handsome horses I have seen in a long time.

Whilst keeping a close eye on the news Thursday morning, I was reminded that Christmas is not that far away and already people are starting to buy presents. To most people the cost of owning a racehorse outright is way beyond their means, but owning a share of a racehorse is far more affordable than they may realise. For less than £1 a day, you can own a share in one of our racehorses. As a member of the Frost Racing Club you can enjoy all the benefits of ownership, including use of the owners’ facilities at the racecourse, entrance to the paddock, joining me and or Bryony if she’s riding your horse at the course, and events here at the Club with our family and other owners. Membership provides year-round entertainment so if you are considering it as a gift or would like to enjoy the benefits of ownership yourself, give us a call. I’m off now to feed the ducks.

Until we catch up again next week, wear a mask in public and importantly be kind to each other.