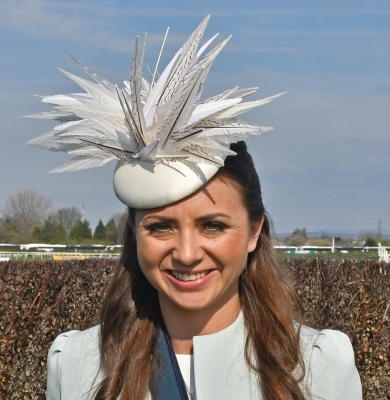 After the massive high of Cheltenham, back down to earth with a BUMP!

She was riding at Southwell, and as I watched on the TV at home and saw the fall could only hope for the best. The camera panned back to her and she had got up quickly and was walking off the course with the doctor. Always a massive relief she seemed to be okay, as with all quick-thinking jockeys she reassured the doc she was fine and would be able to ride her next one! She was “sore” (that is jockey speak…for it blooming hurts) and us mere mortals would still be rolling around on the ground!

Anyway, back in the weighing room it became clear B’s initial hopes of being okay were false and she indeed had broken her collar bone… Not only physically painful but the immediate devastation of realising Aintree was too soon, and she couldn’t recover from this break in time.

At home I had seen her get up and was satisfied that she was okay. I went back up to the yard to do evening stables, blissfully unaware that she was hurt. It was a couple of hours later, when Dan rang me, he told me she had hurt her shoulder. At that point the racecourse doctor didn’t know what she had done, he thought dislocated and she had been sent to the local hospital for x-rays.

It was typical that she had driven to the races on her own that day. So then logistics need to be thought about. How to get her home, how to get her car home, where is all her racing kit, is she staying in overnight. Her weighing room colleagues were fantastic and between them managed to pack her bag, and even remembered all her hair bands and hairnets! Not something the boys normally have to worry about!!! When Sean Houlihan had finished for the day, he drove her car to the hospital and patiently waited for her. They travelled back west, he got her to Junction 14, where Harry Durham and Kate Nutt had driven up from Ditcheat to bring her home the last leg. Meanwhile I had driven from home to Bryony’s house and waited for her to get back. They all arrived about mid-night. I cannot thank all of them enough for helping! From past experience looking after broken collar bones, I had already piled up every pillow in the house so she could inch her way into bed and stay up right.

The next morning, we settled into a routine, I’m not very good at nursing! More of a veterinary nurse and with someone who is feeling pain it is never easy to know what you can do to help. You’re not sure whether to pull, push, lift or just stand back and let the patient work out the best way for them to move with the least discomfort. This I decided was my strategy!!! Bryony had called all the people who needed to know what was going on and set about organising an appointment with a top shoulder consultant, so she could get an accurate diagnosis and most probable prognosis.

So here is where it gets complicated! B and I get on very well, she thinks I’m a “fuss pot” and gets annoyed with me if I try and organise her, so I don’t! With this in mind, I busy myself around the house, meals, washing, etc and just make sure I’m on call. She is being very patient, there is nothing worse when you don’t feel well than to have someone waking you up, fussing and constantly asking if you’re okay.

My first journey, as newly appointed chauffeur, was to go and see the consultant in Cardiff. Bryony’s car is beautiful and it is her pride and joy, it is also very large! For all of you who have ever had to drive someone who is injured the constant awareness of not jolting them or stopping suddenly and adding to their pain weighs heavy on your mind. It seemed to render me incapable of driving with any confidence and I had reverted to being a nervous wreck!!! Also, given that every pothole we met could not be avoided due to oncoming HGVs and every drain was risen. To top it all, it seemed to me when we got to a complicated junction or roundabout and I needed my co-driver, she was on the phone! I have also noticed that B has inherited her Father’s trait of just vaguely pointing toward the direction I should be going in a very non-committed way that isn’t at all clear and normally results in me whizzing around again and giving it another go!

I’m not sure how many miles we have travelled over the last couple of weeks but it is many! I used to drive a lot when the children were young and competing with the ponies. Every weekend we were at a show somewhere in the country. But I have to say I admire these jockeys; it is the most trying part of their job. The mileage they clock up is frightening and then to ride as well and if they are lucky enough to be busy, it is constant.

The weeks passed and B seemed to be busy, she had certain appointments and meetings to attend. One, I was so excited about, was The Queen’s visit to the yard. The main problem we had was trying to find a dress that was suitable for such an occasion, that in itself would not normally be a problem with B’s more than substantial wardrobe. The problem we had was trying to get one on!!! Not easy, do you poke the bad arm through first? No… Ok, try sticking the good one through first… No. So, let’s see if we can pull it up… No, not happening. So that flash of blue goes flying across the room and lands unceremoniously on top of her guitar. We try another, now frustration is building up and she is getting really annoyed. She can’t just get dressed without this stupid broken bit stopping her. Another goes flying, this time the offending dress lands on top of the door, “not to worry, I reassure, we’ll find one”. Again we try, all is going well so far and with a bit of wiggling she’s in! Hurrah! Off she goes to Ditcheat, and I start to pick up various discarded non-conforming items of clothing!

Our last trip was up to Oaksey House. I had never been before; it is the most fabulous place. The one thing I sensed there was the atmosphere. It is a place where all the staff are dedicated to healing the body and minds of the unfortunates that find themselves needing help. It seemed to me, if I was injured, I would be inspired to work hard with their guidance but it’s more than that, all the jockeys are obviously impatient to get back riding and will do anything that speeds that outcome. It was the feeling that they are in the care of top professionals in their fields, they understand that they are dealing with professional sports people. These people will drive themselves harder than normal people, they do not accept that their mortal bodies will not let them achieve what they have to. They are cocooned in a place where they can have privacy in their rehabilitation without prying eyes and at their lowest times during their journeys to recovery, the people around them will understand
the frustration and angst.

From there a car had been arranged to come and pick B up and take her to London for an Aintree preview night she had been booked to do. A more professional looking chauffeur than myself arrived and whilst Bryony got ready. Progress, she can dress herself now!!! The very smart driver and I loaded a phenomenal amount of clothing into the car, along with several hat boxes, shoes, coats and so on and so on. Already late and with the driver expressing his hope of a clear run, she was gone.

So back to the car for another few miles! Home back to Devon!!!