A little bit about everything 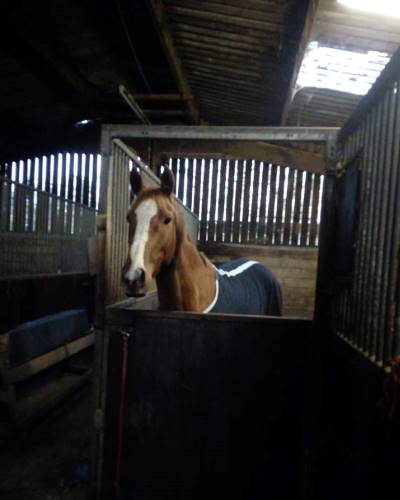 Well, we have been experiencing monsoon conditions this week, with hurricane strength winds! This makes riding out, interesting? The roads are flooded, and we have to be weary of fast cars skidding when they come around the corner and see the string! Again, the indoor has come into its own this week. One lot was in there doing some schooling, it was all going very well, until Jim, was a faller, well actually an un-seat!!! The girls all held their breath, as the boss was rolling around in the sand amongst poles, until it became obvious he was OK when they could stifle their laughter no longer!!! He owes a quid for a fall…

We had fantastic news this week – Percy, one of the “Holybrook” pack, was given the all clear from a biopsy. He is Hadden’s black lab and is hoping to join him in the U.S.A. later on. It was a horrible time waiting for the results, you just have to carry on and keep busy, Percy, was oblivious to all the worry. Although, he did seem to wonder why I kept taking him on the same car ride which always ended up going to see a nice man, who kept prodding him, taking samples and making him have a sleep!

A new horse came in last weekend, she is very sweet and looks good. Jolly, as I’ve decided should be her stable name. Has been up in isolation at the top yard. We have to be careful when we have a new arrival, just in case they are carrying any nasty bugs! She settled in very quickly and is very lucky she sailed from Ireland before it got really rough. Let’s hope she is good, she certainly has a very nice nature, which is always a bonus.

I spent all week winding up my nerves for the weekend’s racing for B. It is a very odd way of life we live? Most of the time we run on adrenaline, fear, eternal hope and we have a huge ability to “pick yourself up again” attitude. I always find it funny trying to explain to “normal” people how a life in racing works!!! Racing and training horses is a strange way to make a living. In my case, I still get nervous every time B’ rides. I have full faith in her ability, usually she is riding well trained horses, who are fit and schooled well. My usual strategy is to walk around the house and peek in through the window. I have no idea why that would help? I also have to watch her jump one! Call me mad, but there are lot of superstitions in racing.

Talking of resilience, Bryony had a wasted journey to Doncaster, she was booked to ride a lovely young horse for P. Nicholls in the bumper and was looking forward to it. The meeting was abandoned after a horse had slipped up, obviously safety has to be the priority for horse and jockey. But nonetheless it was very frustrating and a long drive!

We had the “back man” in this week. He treated several horses and hopefully all his patients will feel the benefit for some physio. I know I could do with some!

The stables are coming along really well. Brian has got down to the end of the barn now. The yard looks very smart and all the horses seem to like their new stables. It did occur to me that the extra drainage we had to do this week to mend a collapsed pipe was probably my new kitchen! Oh, well you never know, I may get it done one day!

I’ve just watched a replay of Newbury, another Saturday winner for B’, Kapcorse was very exciting and dear Black Corton, who as always was brave and gave his all.

I have entered Cuddle Up, for Wadebrige point-to-point next weekend. If you are there, come and say hello.

Have a good week, see you soon.